“Some 8,000 people are employed on the Boots headquarters site, so although rarely open to the general public, these gardens benefit a large number of people. Landscaping and lighting is of a high standard, with a great variety of plants and excellent detailing ….” (Citation for the Civic Trust Awards 2001)“… Lutyens’s approach to the overall space is both logical and creative … innovative in his use of planting ….. The Herb Garden (a reminder that the Boots fortune was built on the back of herbalism) is a witty and modern version of an 18th century patte d’oie.” (Building Design magazine, June 2000)

“… designed by Lutyens, a great-great nephew of Sir Edwin and inheritor of both his forebear’s versatility and attention to detail” (The Independent, June 2000)

“… The whole area brings a feeling of peace, as well as stimulating the mind and thereby providing much needed open space to an otherwise intensive working environment…” (Landscape Design Magazine, December 2000, about the Boots Millennium Garden)

“Opening Mark Lutyens’ book of drawings for his garden designs is like walking straight into one of his gardens. His beautiful, detailed illustrations hint at the meticulous approach he brings to his commissions. “Gardens are art forms as well as being practical places’ he explains ……” (Perspectives Magazine, June 1995)

“…. (Mark Lutyens) believes that the principal function of the landscape designer is to design a garden that is ‘right’ for the present and for the future … to papaphrase Sydney Smith he comments, ‘better long grass and wild flowers than huge herbaceous borders and no gardeners’.” (House & Garden Directory February 2002, ‘Britain’s 50 leading garden designers’) 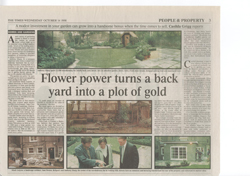